This custom has gone through several modifications. I've basically repainted the armour (originally grey) and replaced the hand drawn skull with a decoupaged logo.

Readers of Mighty Avengers will notice that this custom isn't 100% comic-accurate. Besides small changes to the costume, specifically the lack of leather guards on his arms, my custom is not as tall as the comic version (drawn by Frank Cho). I basically used an old 80's Marvel handbook for his height, plus I'd struggle to find a suitable base if I went with Cho's version.

The helmet and headdress were sculpted using Apoxie Sculpt (AS). I started off by dremeling down Guiles flattop before gluing on small strips of clamshell packaging - the clamshell was the skeleton on which to place the AS. Once the AS had cured, I sculpted the headdress ... a real pain.

This was my first Marvel Legend custom and it's not a 100% comic-accurate. If I could redo it, which seems likely, then I'd probably change his boots and try to find a way to attach his trademark coils.

Recipe
ML1 Captain America head, boots and gloves with everything else coming from ML8 Captain America. I used Citadel "Enchanted Blue" to match the paint of the original Cap.

An old mod that's done the rounds on many forums, but it's still one of my favs.

** The recipe for this custom belongs to NORM. ** 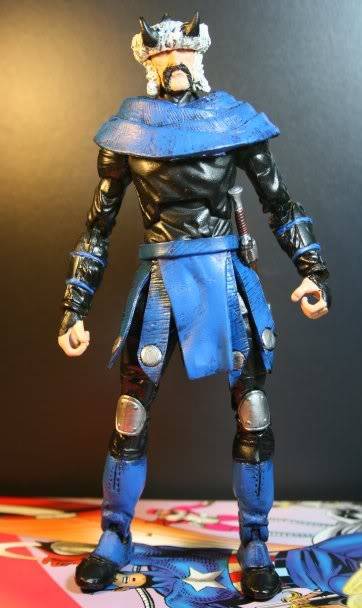 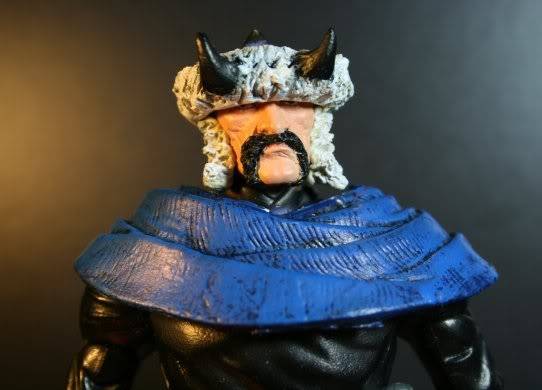 The custom follows the recipe that was used by CoZ (ChurchofZod), well I've tried to follow it as best I can. The base is an ML13 Loki (standard since I don't have the variant) with sculpted headdress. The "scarf" and skirt were made from Dr. Strange's cape and one of Mr. Sinister's cape straps, with apoxie scuplt for the strap studs. 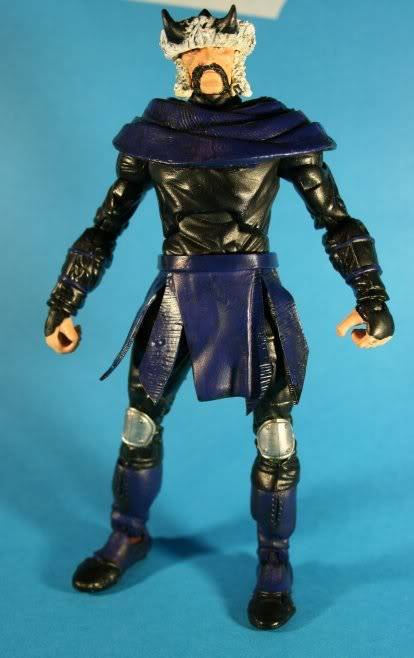 The dark blue (Citadel Regal Blue) I used in the WIP shots seemed more like purple in the photos, so I had to repaint it using a lighter shade of blue (Citadel Enchanted Blue).

Just need to chase down a mace and he'll be perfect. Anyone got tips on how to construct one? 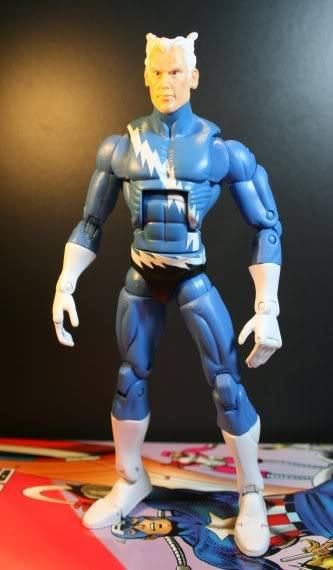 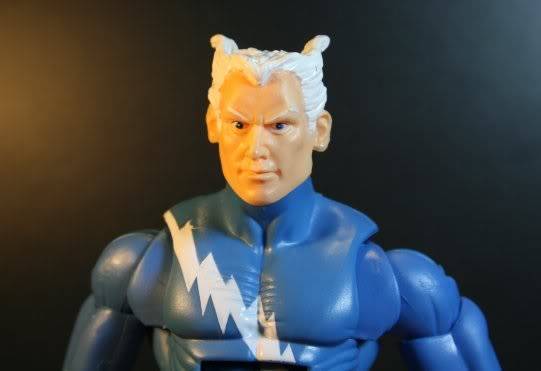 Nothing too complicated. Basically painted his trunks black and gave him a darker skin tone.

I got the idea, well I pinched the idea from CAL.

I went for a modern look rather than the classic since - I didn't have a spare Cyclops. I guess this guy is the replacement for the one killed in the first issue of Brubaker's Captain America run.

Really struggled to find some decent reference pics as Vostok seems to be a 3rd tier character in a team of second stringers ... the poor guy must have serious confidence issues.

I was hoping to use another head. Unfortunately my fodder stock is pretty low, plus the other heads available (Prof X. and Ice Man) looked too human - I basically wanted Vostok to have that "Keanu/bus ride" look.

Recipe
The recipe for this custom was originally done by Kraftywerks.

Painting the eyes was a tad tough and it's a skill I need to improve. I also learned never to drink too much coffee whilst painting eyes. Cracking the torsos (a total of 3) was actually quite fun and easier than expected.

Ahh- memories!
It's people like you that got me into customising - (and now I only do custom transformer repaints/the like

) So thanks for sharing!