heres a hint Stenc, I used some putty, some wood, some flocking, some plastic, some TLC


!! thats right! a pizza oven with a grassy knoll on top!

Hey guys sorry to say but I will be pulling out of this comp, The wife is getting induced tomorrow with our second child. I'll let you all know what it is when I get the chance.

hemble wrote:Hey guys sorry to say but I will be pulling out of this comp, The wife is getting induced tomorrow with our second child. I'll let you all know what it is when I get the chance.

Ditto on the well wishes! hope all goes as smoothly as possible! Custom humans take precedence over custom toys!!

That doesn't mean he can enter this custom in the comp... it's the wrong scale and not recycled... I hope.

Best wishes from me too Ron.

Thanks for all the kind words.

Talk tou you all soon and thaks again.

congrats! cool name ! give that man a new toy!

Congrats Ron, I can just imagine the Winnie the Pooh, etc style Dioramas in his room.....

Congratulations Ron... I hope Mum and Bub are both well.

Back on topic... my entry isn't doing too well. I finished too early and couldn't help myself but to try and keep improving it - which never works! I've had to photograph it and put it away before I ruin it completely.

Less than a week to go before the due date when we can all give birth to a new creation.

have finally stuck everything together, need to sculpt head & paint & I'm done

you guys left ur homework till the last day as well now didn't ya lol.

Thanks for the kind words Mum and babes are doing well and looking forward to seeing everyones cool customs.

OK I'm posting today as I probably won't have a chance tomorrow.......lat entry needs to be in my midnight monday 25th

so like last time for your submission please post:
a pic/link to the character you made (if not well known)
a work in progress pic(s)
final detail pic(s)
and a recipe/parts/how to build

Simmo has organised a judge who will be sent the three best photos frome each entry & a winner will be chosen......lets see 'em!

OK here's my entry.......DUDLEY from StreetFighter 3rd Strike..........he enters the tournament to get back a luxury car that was his fathers....(ugh terrible back story)
Character base picture in my WIP photo........really wanted to capture the thin waist & big legs & torso like the pic........he's made from a Savage Dragon torso & arms, SF Balrog boxing gloves, SF Akuma pants, sculptued over SF Guile Boots (bit of a rush job will fix eventually) and a SF Birdie head. So I definately fit under the %50 recycled rule.........Sculpted the birdie head to make more square/cut hair & moustache, sculpted cumberbund & braces, and cuffs for the shirt sleeves

Well mines based on the mythological creatures of half man, half beast! So loving the idea of the Sphynx, but preferring the centaurs retaining the upper arms, I decided on the following figure I call Tyris, after the babe from Golden Axe!

EDIT ** forgot to say what i used LOL**
Double edit Listed wrong pics! the ones on the black surface didnt have her ponytail or bum armour on!! sorry!

-torso of anne obrien, reshaped the ugly nose though, and a lot of apoxy sculpt in places im sure u noticed! Sanded off hands/face/arms
-body of aslan from whats-its-name
-wings from some random chic I had in fodder box
-Apoxy sculpt boobs, hair, fur, snake head on tail,
-Metal sheet for armour on arms
-leather strap on bikini and weapon hand grip
-Styrene shaped for armour and weapon
-green stuff for face mask and bikini top

slashing up with a custom made ' Talon Blade' on poor ol zombie guy!

Better not put any more pics on, unless someone wants me too lol. Decided she need a base to stand on as well, so slapped some flocking on a timber board, made a fake tree and some real rocks, and added mr zombie !

Firstly... very nice entries so far. This is already tough.

Alrighty then... my entry.

I used the torso and arms from HML Captain America, crotch from ML War Machine, upper legs from ML Luke Cage, lower legs from HML Black Knight, SWTF Darth Vader head, light saber, and chest panel. I clad the arms, torso and legs in one fabric, then put his "inside" cape of different fabric under his belt. I used some polypropelene (?) to make his chest and shoulder armour.

I cut the light saber and put magnets on both parts so he can have it lit up or not. I also put a magnet in his belt so he can hang his light saber on it. Then I went over board with the magnets so that the armour attaches to the body with them and then his outside cape attaches to the armour as well. This means it is all removable. Only minor painting and carving required.

I only collect 6" figures and always wanted some Star Wars ones... I may have to make more I think. I only really noticed in the photos that the capes have a few loose threads... I'll have to fix that up.

Enough talk - here are the pics. 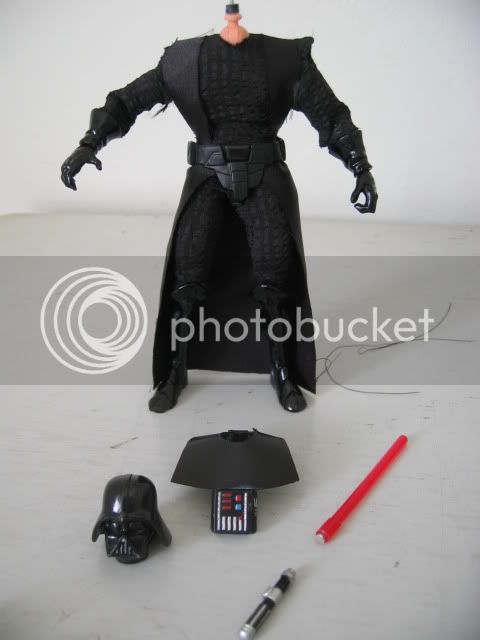 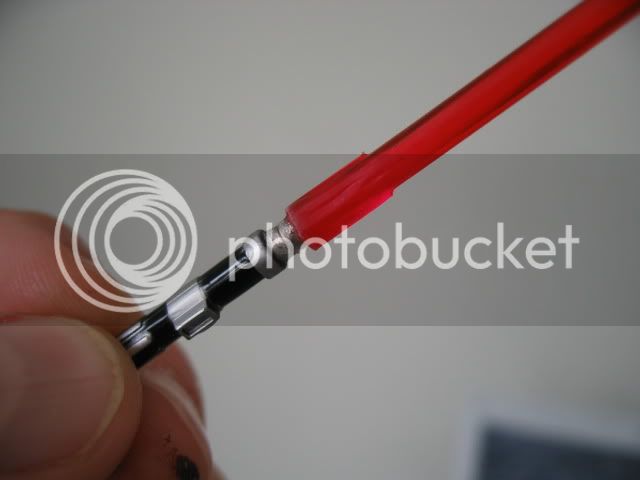 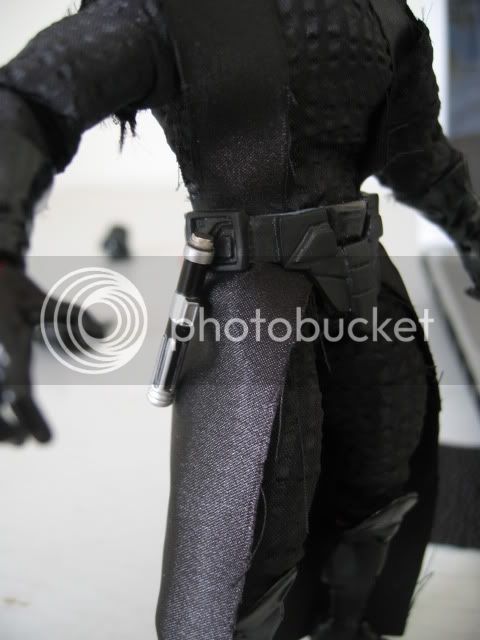 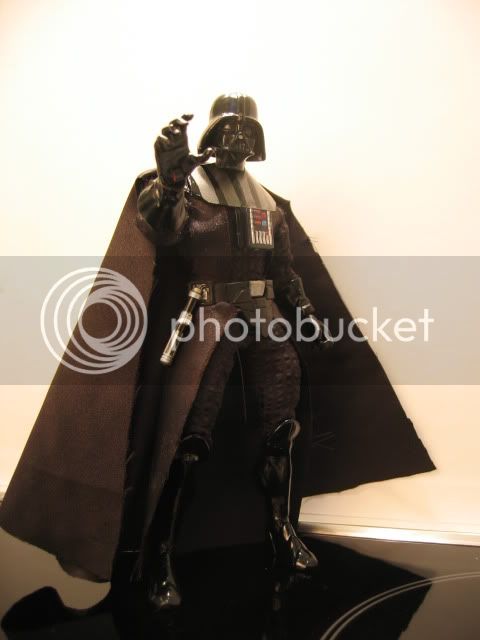 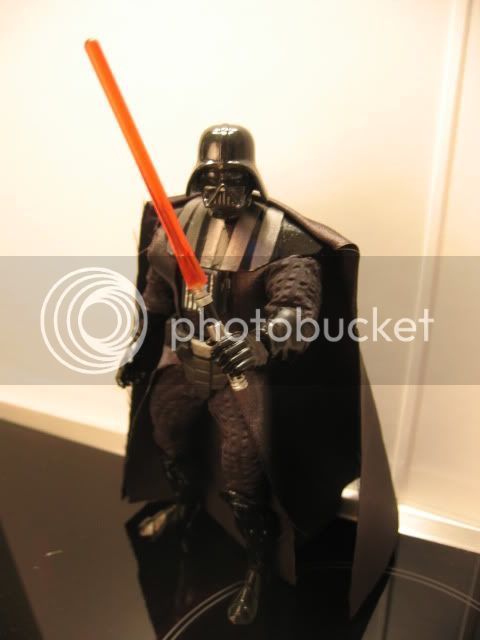 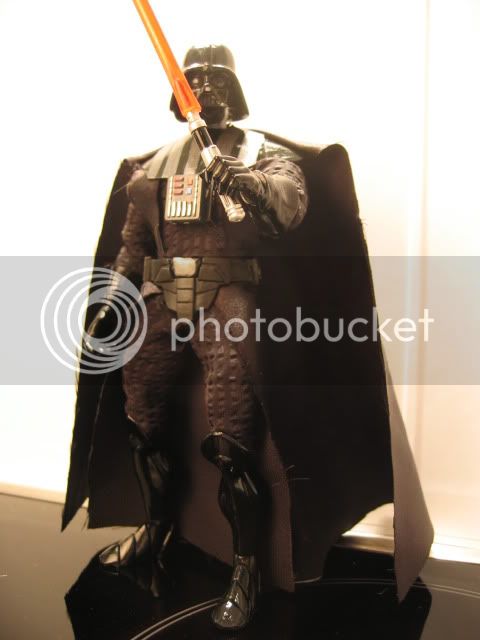 Looking good so far, I will have pics up in the next couple of hours.

Okay, I've always wanted a Maverick figure in scale with ML. The 3 3/4 inch scale MU is something that I do not collect (although I must admit that Maverick is not bad at all)

Recipe.
Torso, arms and gloves are Deathlok.
The head is a spare LOTR Legolas.
The boots are Wonder Man's.
The belt comes from Omega Red, pouches are from JLU Mirror Master.
The upper body armour comes from Silver Centurion Iron Man, the back pack is also from Deathlok...just positioned upside down.
The mask/helmet is a combo of sculpey and the flight pack that comes with DCUC Orion. Tubes are just borrowed bits from craft box. I also added pegs so his shoulder strap's would give for more movement. His legs are also sculpted in the armour and cloth areas.
Hair is sculpted and the band of bullets and belt are just from the fodder box. 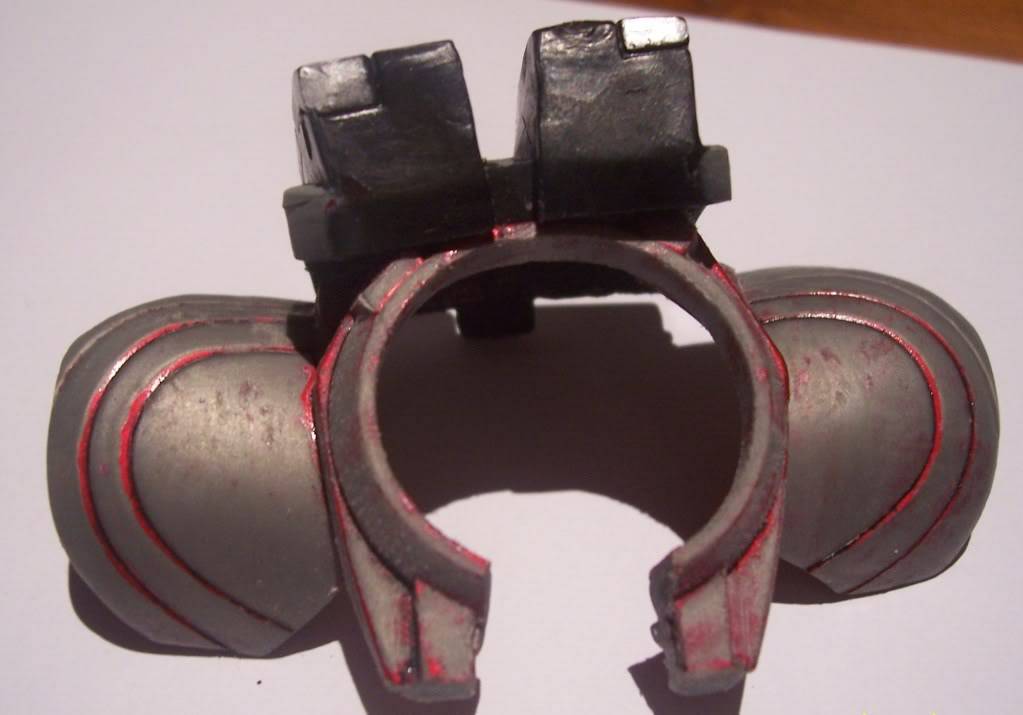 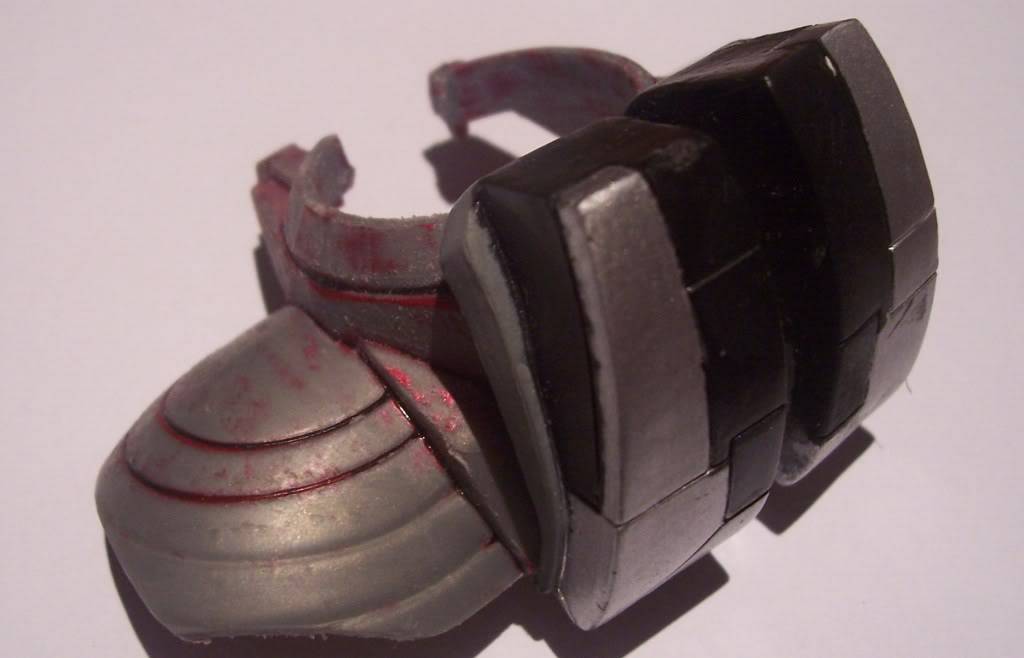 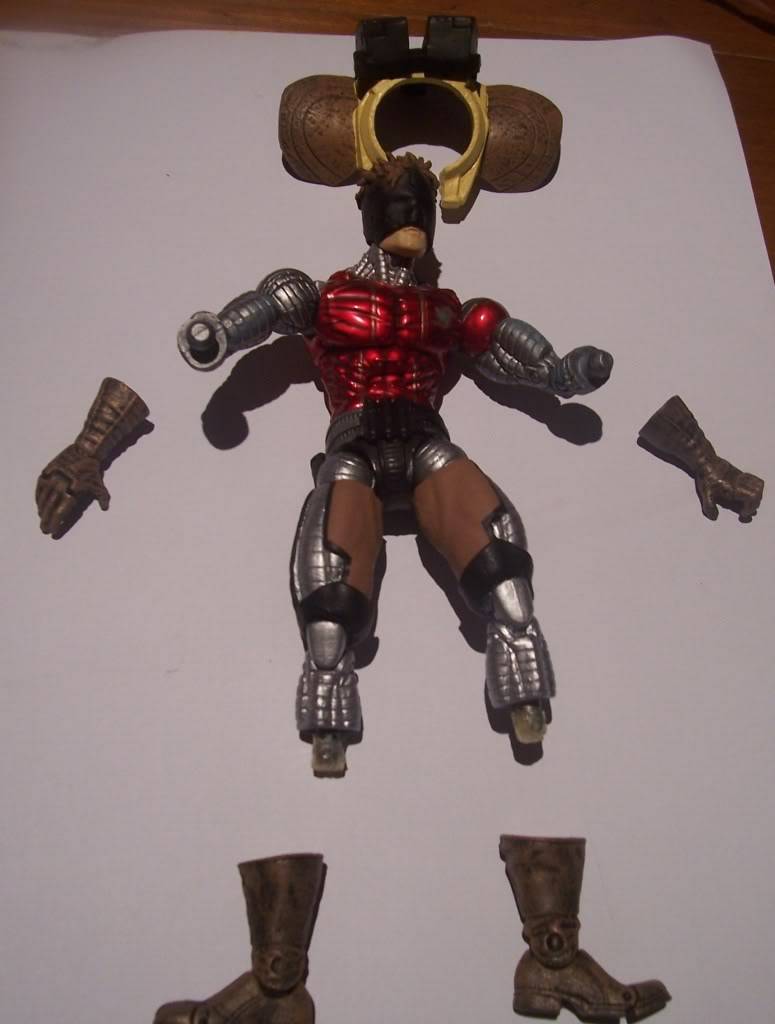 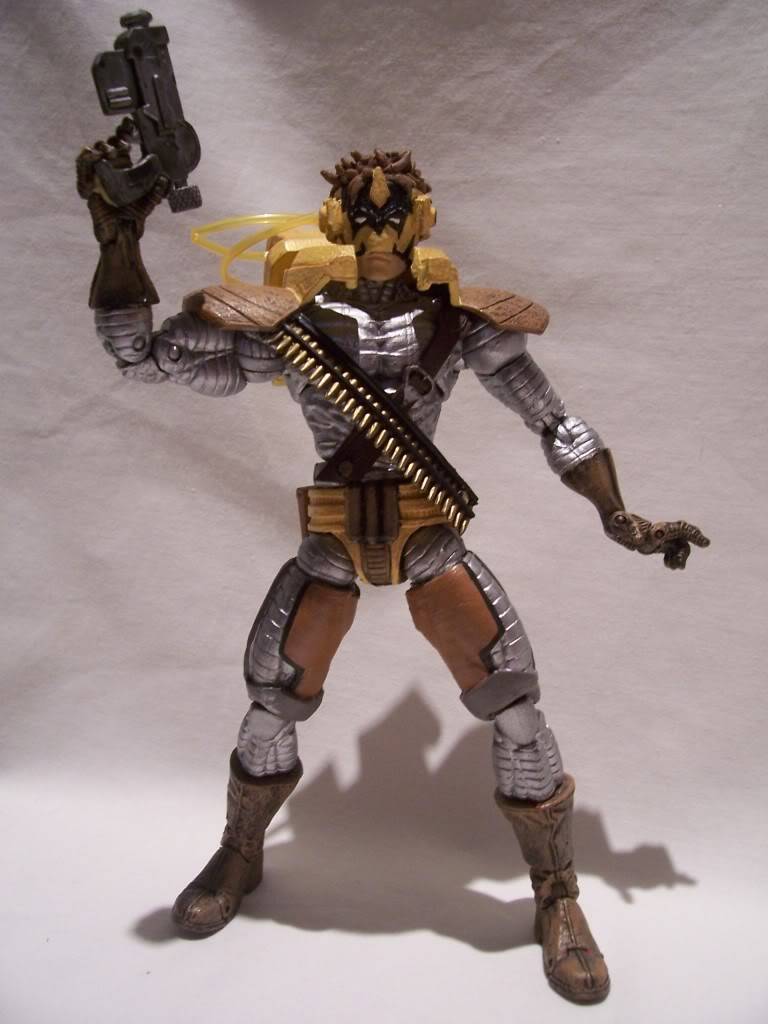 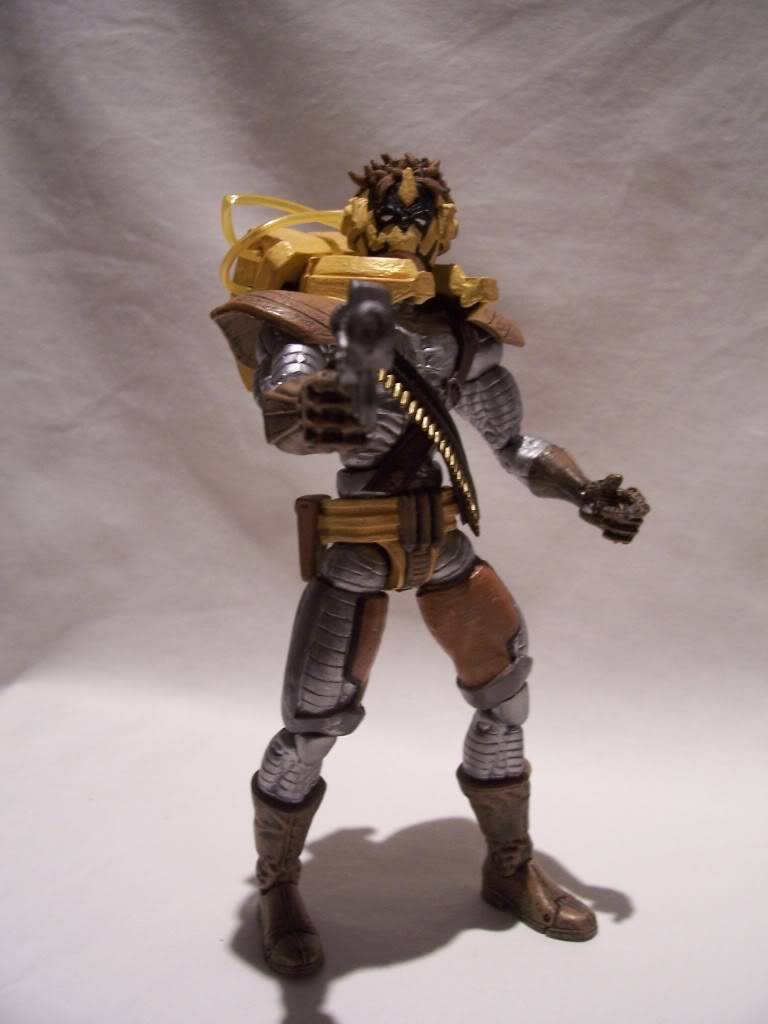 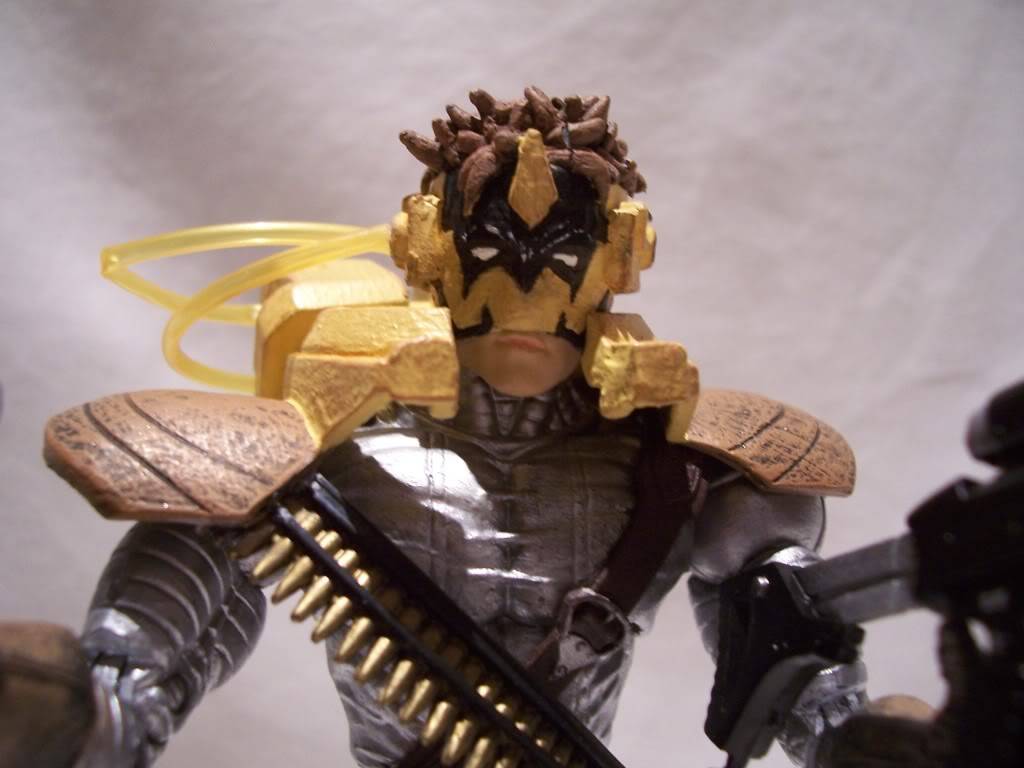 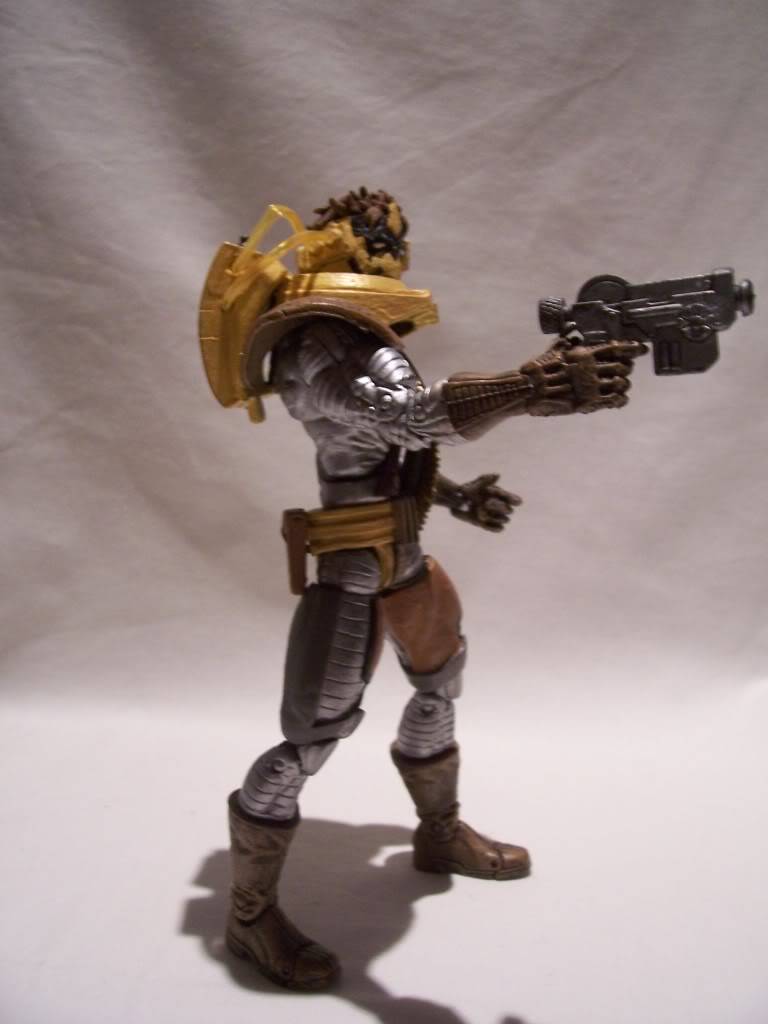 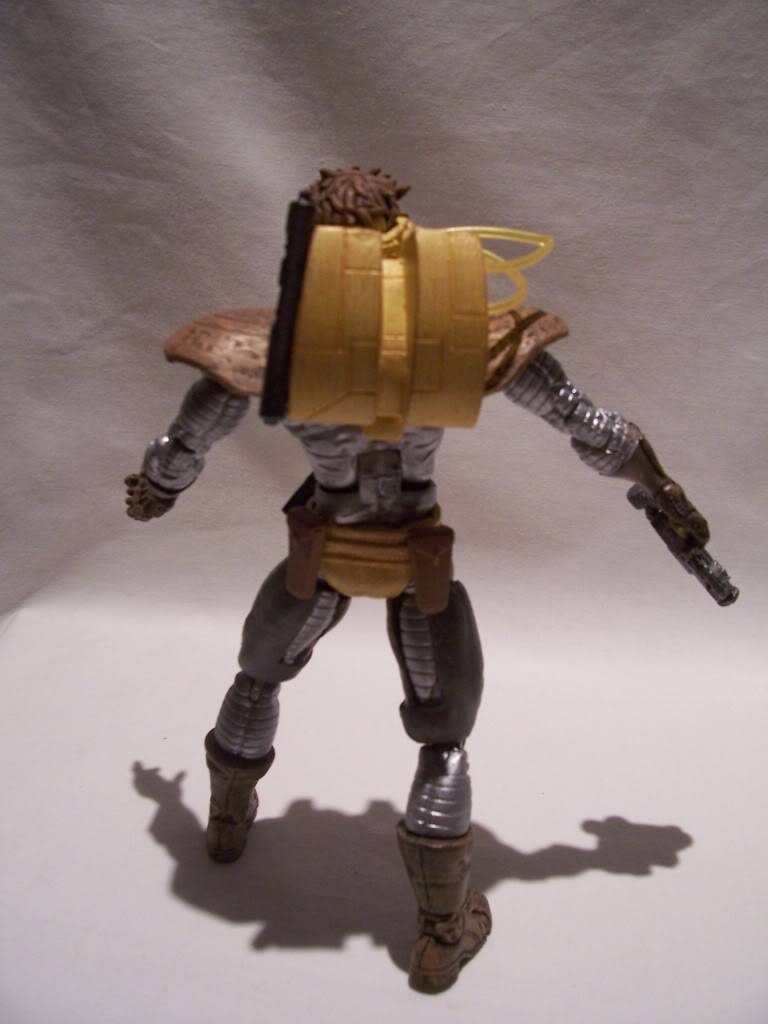 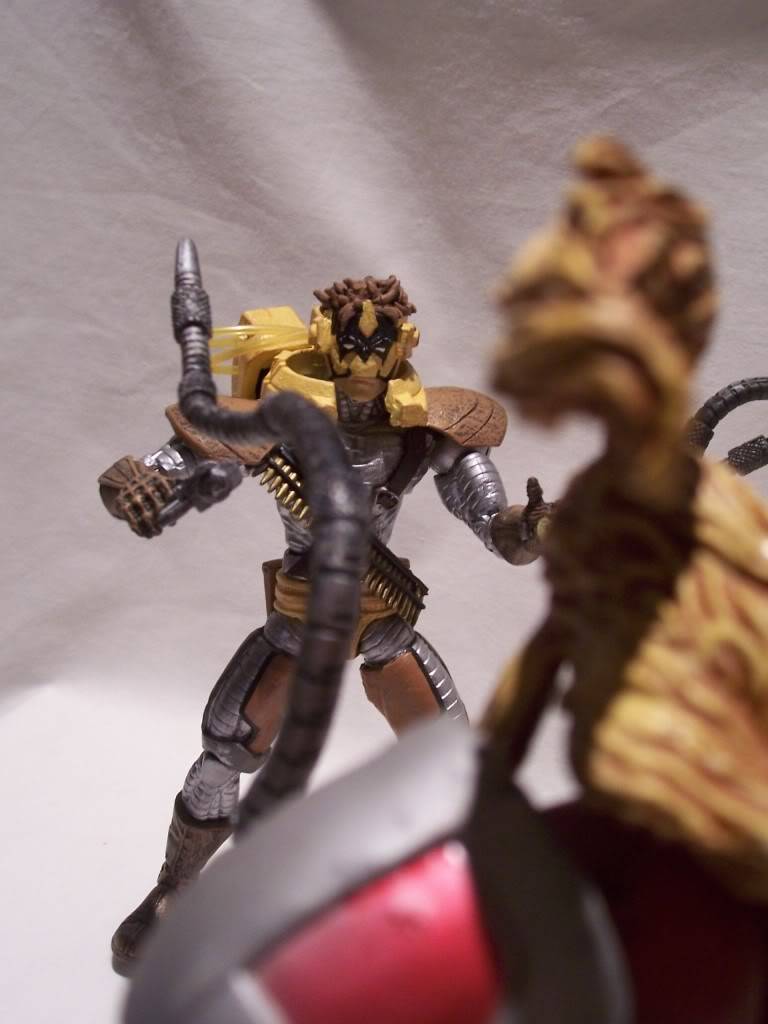 Yeah I didn't make the cut - apologies to all